The River: No reason at all to be bored, given water striders, whirligigs, critt…


The riverboat captain is a storyteller, and Captain Don Sanders will be sharing the stories of his long association with the river — from discovery to a way of love and life. This a part of a long and continuing story.

About a year ago, I read where a pleasure boater noted he left his marina in his fast plastic boat only to discover it was too early for any of the bars he frequented along the Ohio River to be open. He went on to say he was “bored silly with nothing to do,” bobbing around until a floating pub opened for business. “What was wrong with that dude?” I wondered. “He’s on the river, for pity’s sake.” 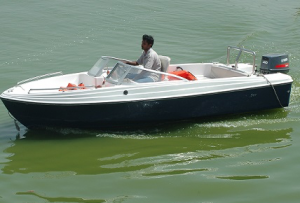 A pleasure boater noted he left his marina in his fast plastic boat only to discover it was too early for any of the bars he frequented along the Ohio River to be open. (Photo by Kondicherry)

There is always something to see and experience on the river if you care enough to look closely. Often, it’s right by your boat on the surface of the water. Take “water striders,” for example.

Water striders, also called “water skaters, water scooters, pond striders, Jesus bugs, and so forth” are those tiny bugs darting effortlessly about on the water’s surface like miniature race cars without getting themselves wet. Small hairs on the strider’s legs and body trap air to help keep the insect from breaking through the film of water tension on the surface of any body of water where the striders live. There, they hunt for any hapless bugs unfortunate-enough to fall into the water unequipped with the strider’s ability to stay atop the liquid surface. 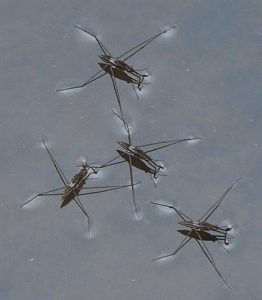 There is always something to see and experience on the river if you care enough to look closely. Take “water striders,” for example.

Water Striders are relentless hunters and carnivores. They are also fascinating to watch from a deck chair while “chilling’” on the river without anything else to do but to relax and enjoy the peace and solitude of the river when no one else is around. At least that is what I’ve done countless times from the deck of the Rafter CLYDE. Remarkably, the exercise costs nothing compared to boozing in a waterside cafe and then zooming recklessly about on the river’s surface like an intoxicated pond strider.

During my observations of the water strider population alongside my paddlewheeler, I watched an even-smaller, minuscule, colony of water critters inhabiting the surface of the river looking like black whirlygigs spinning and exploring. To try and find a name for the little fellers, I searched the internet where I found Whirligig Beetles, Water Mites, and a host of other aquatic creatures, but none of these insects seem to be the ones I’ve been striving to identify. Any help would be much appreciated. These critters were great fun to while away the time. Had the pleasure boating fellow mentioned earlier, bored because a bar wasn’t open, might have been better…

Read more:: The River: No reason at all to be bored, given water striders, whirligigs, critt…

Cattle are a Sunshine State tradition

Megan Brew  |  For the Daily Commercial As you read this, you may be digesting your third or fourth...

(CNN) —   Today’s the day. Black Friday is here, and so are incredible savings on products across all...

With coronavirus cases on the rise again, several states have re-enacted stay-at-home orders this holiday season. After spending months...

As the temperatures start to dip from summer highs, it means two things: Winter is coming and so are...

Save on Apple AirPods Pros, bathroom scales and more

Request for Information Regarding Domestic Water Use

Letters to the editor: Keep Peters in Senate; Leather is for cows, not cars; Aut…

Not your granddaddy’s river: The North Platte has evolved with flow control | Op…