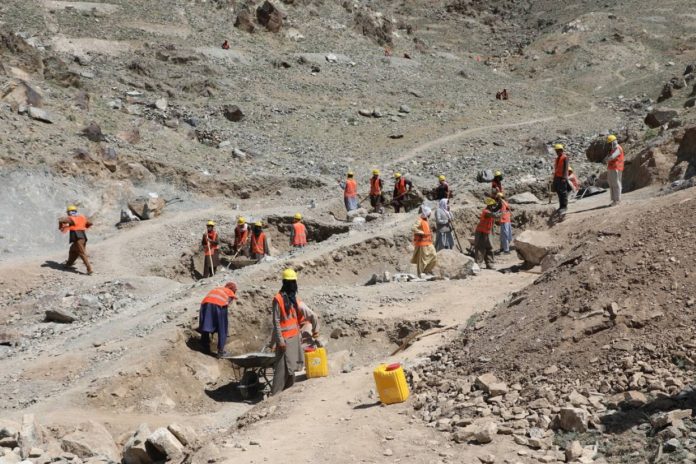 KABUL: Gul Mohammad was making a good living as a private van-driver, until Afghanistan went into lockdown to slow the spread of the novel coronavirus and his work dried up.

Now, instead of ferrying commuters around Kabul, Mohammad, 49, brings a flask of green tea to a site outside the capital and spends his days helping dig a series of 2-metre-long (6.5-foot) trenches aimed at saving the city from a water crisis.

As lockdown measures imposed in March take their toll on Afghanistan’s workforce, the government is employing more than 40,000 jobless workers to rehabilitate groundwater supplies for its fast-growing capital.

“The good thing is that the needy people from nearby are hired to just walk to work and get regular pay when there are no jobs in the city due to coronavirus,” said Mohammad.

Afghanistan has joined a growing group of countries that are turning to “green stimulus” projects to address two urgent challenges at once: keeping the economy running through the pandemic and tackling climate change.

Kabul’s groundwater supplies – its primary source of drinking water – have been over-exploited, putting the city of up to 7 million people at risk of severe shortages, warn water experts.

A study published in May by the Afghanistan Research and Evaluation Unit (AREU), an independent think-tank, calculated that the city’s groundwater levels had decreased by about 1 metre per year over the past two decades.

Some parts of central Kabul have seen drops of as much as 30 metres over 14 years, the study said.

Globally, about 1.6 billion workers in the informal economy, representing nearly half of the world’s labourforce, will likely lose their livelihoods due to the fallout from the coronavirus pandemic, the International Labour Organization said in April.

Planned to run for at least a year, the Kabul water project is paying labourers at least 300 afghanis ($3.90) per day to dig close to 150,000 trenches, along with 17 small dams and spillways, on the outskirts of the mountainous Afghan capital.

The network of trenches focused on six locations will store and absorb the rainwater and snowmelt Afghanistan gets in the winter and spring, but which is usually wasted through flash flooding, Naveed explained.

“In the second phase of the project, 13 million saplings will be planted along these trenches and thousands more people will be employed to plant and preserve them,” he added.

The trees will be mainly local species that require less water, such as pistachio and pine nut, Naveed said.

While climate change has led to more frequent short rainstorms, the number of longer rainfall events needed to gradually…

Tips to ensure your building has safe, clean water

On this date in Maine history: July 4

July 4, 1786: Ten years to the day after the signing of the Declaration of Independence, the residents of...

During the coronavirus crisis, the Los Angeles Times is making some temporary changes to our print sections. The prime-time...

Kame Gowda's efforts led to dry hillocks getting vegetation and greenery increasedBengaluru: Kame Gowda, a shepherd from a small...

NEWARK, N.J. (CBSNewYork) – There was a major announcement in Newark Thursday after years of fighting to clean up...

CHEYENNE – Retired military professional and Vietnam veteran Donn Edmunds has announced his intent to run as a Republican...

Water charges may be in the pipeline for Chch households

Key findings: the Guardian’s water poverty investigation in 12 US cities | US ne…

UN-Water Chair: After the pandemic we must build hope through water and sanitati…

source of total federal power over subnational reality in Nigeria?

Landslide in Shuswap wipes out water connection to 500 people

Enjoy a safe summer with these water tips | News