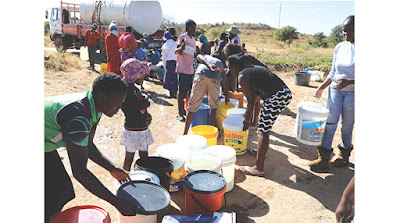 PRESIDENT Mnangagwa has reaffirmed his administration’s
commitment to solve water problems bedeviling Bulawayo, further directing that
a three-phased budget be immediately presented to his office for approval.
The city is going through one of its worst water problems
in recent years. Residents in most suburbs in the city are receiving tap water
only when it is available after the city council announced that it was now
failing to provide water at least once per week as it was doing in recent
months.
Last month, Treasury availed $205 million as part of
efforts to improve water supplies in the city but the Zimbabwe National Water
Authority (Zinwa) said it will start rolling out the cash injection by end of
the month as it mobilises engineers to embark on the works to improve water
supplies.
Yesterday, President Mnangagwa met City Mayor, Councillor
Solomon Mguni, Town Clerk, Mr Christopher Dube and the Director of Engineering
Services, Engineer Simela Dube at State House in Bulawayo where he was briefed
on the water situation and possible solutions.

In a briefing after the meeting, Permanent Secretary in the
Ministry of Information, Publicity and Broadcasting Services Mr Nick Mangwana
said the President directed that the key stakeholders in water delivery should
immediately come up with a detailed proposal to tackle the water crisis in the
city.

“This meeting noted that though the issue of water delivery
in Bulawayo and its attendant challenges are well known to successive elected
city council officials and representatives, there has not been a comprehensive
plan to address it effectively.
“To that end he directed that the stakeholders to this
issue, who include Bulawayo City Council, Minister of Lands, Agriculture, Water
and Rural Resettlement and the Zimbabwe National Water Authority come with a
detailed and comprehensive proposal to solve the water challenges,” said Mr
Mangwana.
He said the proposal should have a three phased budget plan
which the President will look at so that the projects are commenced as a matter
of urgency.

“This proposal should outline the major challenges and the
proposed solutions thereof, in a format depicting the respective activities,
the cost and the overall budget in three phases and this should be brought to
His Excellency’s attention as soon as possible in the interest of bringing
water to this great city,” said Mr Mangwana.

In an interview after the meeting, the Town Clerk Mr Dube
paid gratitude to the President saying they came out of the meeting assured of
Government’s support in resolving the water crisis.
“Initially we were not part of this meeting but we were
invited through the Matabeleland Collective who felt we should take advantage
of President Mnangagwa’s presence in the city to highlight the water
challenges.
“What we noted is that the President is fully aware of the
situation in the city but he now has a greater appreciation of the…

The impact of melting glaciers on Alberta’s water supply

A First Nation that has been living under a boil-water advisory for 25 years is asking Indigenous Services Minister Marc Miller...

Kuala Lumpur/Manila/Geneva, 26 November 2020 – Consecutive, devastating typhoons in the Philippines have laid the foundations for a long-term...

JERUSALEM (AP) — Israel’s blockade of the Hamas-ruled Gaza Strip has cost the seaside territory as much as $16.7...

Polavaram officials not to release water after March 31

KAKINADA: Though there is plenty of water in River Godavari, irrigation officials will not be able to supply irrigated...

FLINT, MI -- Attorneys for the city are warning that Flint could be left with “astronomical liability” if it...

The impact of melting glaciers on Alberta’s water supply

How hormones affect your skin before and during your period | Living

What to Know in Washington: Stalemated Virus Relief Talks Resume