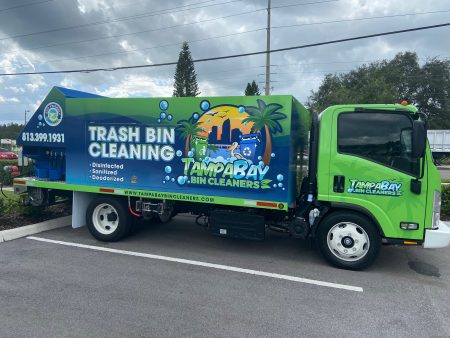 In a world that calls for reimagining the possibilities after this pandemic’s blow to professional livelihoods, Grant Radcliffe has taken his turn of events to launch Tampa Bay Bin Cleaners in south Hillsborough County.

Intrigued by a Facebook video posted by his friend in Delaware, Radcliffe set out to investigate for himself the possibilities of starting a trash-bin cleaning business in Florida after he lost his job in the wake of the coronavirus shutdown in March.

“A majority of people have never heard of this service,” Ratcliffe said. “I was in the same position before I saw the video on Facebook. It’s very prevalent in the United Kingdom, where it’s done on a regular basis, but in the U.S. it’s a fairly new concept.”

After Ratcliffe pressure-washes the outside of the bins with water only, a hydraulic pump lifts the bins up into the truck, where two high-pressure steam nozzles, with 360-degree cleaning heads, blast water at 220 degrees, paired with a disinfectant that “kills all festering bacteria, promoting true cleanliness.”

“It pretty much gets everything spotless,” Ratcliffe said. “If the cans are really bad, I add an eco-friendly degreaser. All of the water that is sprayed into the cans is self-contained. It all collects back into my truck, so there’s nothing left on the ground, which people greatly appreciate.” 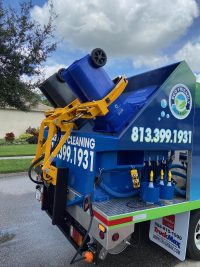 Tampa Bay Bin Cleaners can clean and sanitize two trash cans at once.

Finishing up, Ratcliffe gives the bins a quick wipeout and inspection, “to see if there’s anything that might have been missed,” and then applies an “eco-friendly deodorizer spray with a citrus smell.”

Consider the alternative: Lugging bins out to the driveway, donning gloves, applying a bleach, grabbing a bush, scrubbing away, dumping it out and watching as the water runs off into the street and seeps into the ground.

Ratcliffe said his system is not harsh on the environment and that his truck has both clean and dirty water tanks. The dirty water is considered rainwater and back at the office is discarded into a sewer cleanout, Ratcliffe said. A fine screening process prevents larger pieces of trash from getting into the dirty water bin.

“I love it,” Ratcliffe said about his truck, which he said a videographer likened to a big Tonka truck. “It drives very well, and it handles great. It’s like a big toy with all the levers you get to pull.”

Tampa Bay Bin Cleaners launched this summer and already has a steady base of growing customers. The service area includes “basically the south shore…

Will Samsung build a semiconductor facility in Genesee County?

Multiple officials from a variety of agencies at the local and state level cited non-disclosure agreements when asked about...

Expert Tips to Stay Healthy And Boost Immunity During Monsoon

Dave Marston: A clear warning about the Colorado River