Reclaim the Drains in the Cities

The ongoing flood in Hyderabad ([i]) and in most cities & towns of India during the monsoons this/every year are the result of, ‘Acts of Humans rather than Act of God’. These crucial maps developed for urban development, show the natural water system of a digital/smart Hyderabad comprising of a system of waterscape with Musi or Musinuru or Muchukunda River flowing west-east dissecting the city into north-south, a large number of lakes or ponds and innumerable unrecognized/unacknowledged small drains, mostly referred as ‘nala’ with a stigma of it being dirty. Similar maps are developed in several research outcomes for all the smart (and not so smart) cities of India where one can witness the existing system of waterscape([ii]). Ironically, the maps are left to be mere maps in the archive and sabotaged by the human endeavors collectively to tame the land and the water through urban planning and development resulting in fast deterioration and disappearance of the water resources ([iii]).

While more reasons for such floods are cited rightfully as, the encroachment of the land from the river&lakes banks ([iv]), and the wastewater discharge &solid waste dumping into the rivers&lakes ([v]); lesser is discussed about the state of the drains apart from they being dirty. If there is ONE thing as the root problem as well as the solution of the flood (and even drought and loss of biodiversity) in the cities/towns of India, it will be: addressing the systematic loss of the Drains and reclaiming them for relishing the rains and replenishing the rivers & lakes.

‘The Drains’were originally natural rainwater drainage courses interlinking the lakes and the rivers of a place. ‘The Drains’ traditionally in the form of streams, swamps, peats, wetlands, marshlands and were not as dirty as they happen to be now after getting engulfed in the urban development. The negative connotation as, ‘Ganda Nala/Naali’has occurred after they are turned into wastewater and solid waste dumping areas, for example, the Darbhavati River in Jaipur became Sukha Nala in a span of few decades. This forgotten as futile waterscape on the map, ‘the drains’, occupy nearly equal landmass alongside rivers & lakes in the cities. ‘The Drains’ need attention since they are the lifelines of the river/s & lake/s and the problem solvers of the flood-like situations of Hyderabad when the water is gushing on the streets in the absence of the network of water channels to bring water from one place to the other. 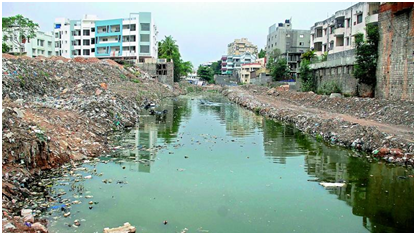 Read more:: Reclaim the Drains in the Cities

Real Estate Investing: Is It Better to Build or Buy a House?

Auckland drought: For whom the meter rolls – a water shortage-era thriller

OPINION: If this column was a paperback thriller, the enticing blurb on the back cover might read like this:...

Simultaneous production of sugar, power generation from bagasse is environment-f…

Simultaneous production of sugar and electricity generation from bagasse -- a by-product of sugarcane -- in mills is more...

With the growing tension between India and China, the latest report from the Chinese Academy of Sciences pins the...

Over the past few years, underground aquifers, wells, rivers and streams have been drying up at alarming rates all...

02:05 How many people would you guess don't have access to clean water and proper sanitation? Half a billion?...

Water Cooler: How to disinfect a car