Pay for testing, or go straight to filtration systems


It’s not clear if the state will also foot the bill for treatment if PFAS is discovered in the wells that it tests.

“First step is testing,” Tierney said. “I cannot comment on further steps at this time as we need to see what the testing results are.”

Testing and treatment combined for the potentially deadly chemicals could cost more than $1,000.

ExploreWe have 1.5 trillion gallons of drinking water. Are we keeping it safe?

Tierney alerted the Dayton Daily News about the state’s decision after the news organization informed the Ohio EPA that a resident felt the agency had the moral obligation to taxpayers to pay for testing.

“Now that the Ohio EPA has detected the (PFAS at Aullwood), they have a moral obligation to test all the wells as a service to taxpayers,” Earl Moyer said three weeks ago.

Sherry Edwards and her husband live across from Aullwood. They have discussed whether to pay for testing or to assume their well is contaminated and invest in a treatment system. One option, she said, is a reverse osmosis water filter system, which experts say is highly effective, but costly. 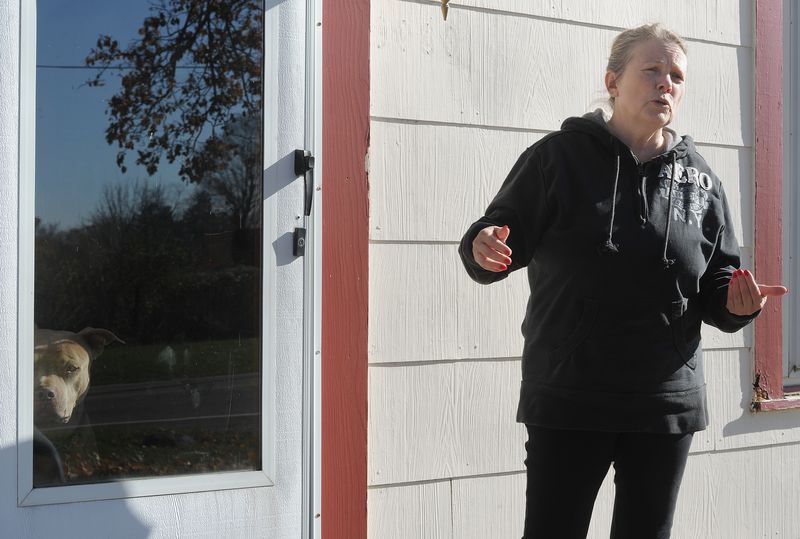 Sherry Edwards stand in front of her home in Butler Twp., Montgomery County, while discussing her options for testing her well for PFAS after the potentially deadly chemicals were discovered at nearby Aullwood Audubon Farm Discovery Center. MARSHALL GORBYSTAFF

Like some other residents in the area, she tests her well regularly for a variety of contaminants. But until they received the letter urging them to test for PFAS, they’ve never heard of the group of chemicals. PFAS chemicals at unsafe levels can cause multiple health issues, including birth defects and cancers — the EPA recommends that the levels not be above 70 parts per trillion. Edwards and her husband continue to drink the water from their system while also exploring their options and gathering information about PFAS, she said.

Earl Moyer, another resident, is researching PFAS and sharing the information with neighbors. They’ve also discussed finding a company that offers group rates for testing and treatment, he said.

ExploreShould Ohio set its own limits for chemicals in drinking water?

Health officials sent residents a list of PFAS drinking water sample collection services in the state to test their wells. The total cost can range from $500 to more than $1,000, depending on the company. Treatment systems would cost an additional fee if PFAS is detected above the EPA’s action level of 70 parts per trillion, officials said.

There are several state and federal grants, and low interest loan programs available to help lessen the financial burden on well owners. Qualification for some programs is based on household income and other factors.

Given the fact that testing and treatment can be costly, and the state will only pay for some tests, residents who are near where PFAS was discovered could bypass testing and go straight to installing treatment systems. The Ohio Department of Health…

Fractured: The stress of being surrounded

This is part 2 of our 4-part series, "Fractured," an investigation of fracking chemicals in the air, water, and...

“ The report titled Global Home Water Filtration Systems Market is one of the most comprehensive and important additions...

Fort Collins, Colorado: The Whole House Water Filter Market report is intended to provide a 360-degree view of the market...

Easy and simple ways to improve your coffee at home

Ordering coffee from your favorite café can be a treat, but it's not the most budget-friendly option.Making a cup...

Narcisa Mikov of Miamisburg is the executive director of RipplAffect, a local no…

“Because my husband worked for World Vision International, I knew there were many children around the world in need...

Fischer: Better late than never? Not when it comes to home maintenance | Lifesty…

A little over seven years ago, I found myself sitting on my partially mowed lawn amid a crumpled heap...

Worried neighbors dig in against Skagit County mine expansion

City of Benavides without water