A variety of nutrient stewardship and conservation practices are available for Iowa farmers to use to improve soil health and water quality. In 2020, 4R Plus followed four Iowa farmers through the growing season to learn how they used conservation and nutrient stewardship practices on their farms and the benefits they are achieving, despite the challenging weather they faced. 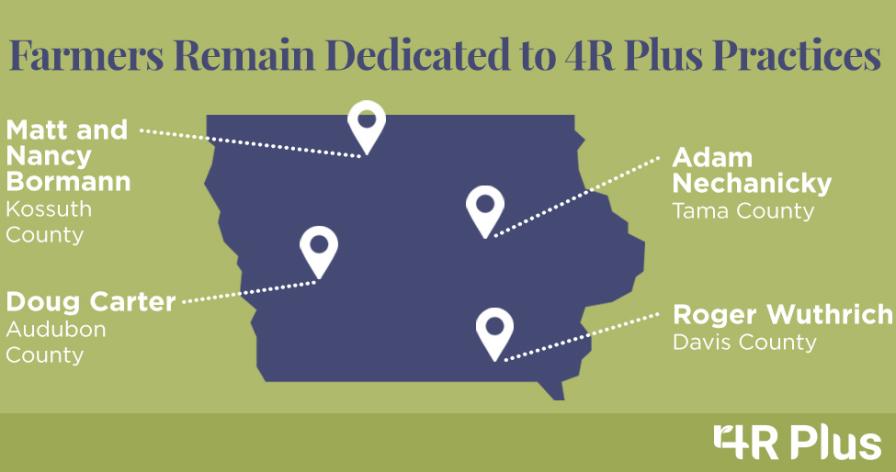 4R Plus followed four farmers from various parts of Iowa through the 2020 growing season to learn how nutrient stewardship and conservation practices benefited their farms.

4R Plus involves using precise 4R nutrient stewardship along with conservation practices like no-till and cover crops to achieve a more productive crop now and in the future while protecting Iowa’s natural resources. Each of the farmers recognizes improving soil health is directly tied to crop productivity and has additional environmental benefits.

The 2020 growing season brought difficult farming conditions, including widespread drought and hurricane-strength winds from the August derecho. These challenges served as a reminder to our farmers of the importance of using 4R Plus practices to build resilient soil.

Doug Carter of Audubon County in western Iowa was in the bull’s-eye of severe drought for much of the growing season this year, but he found that his no-till operation has improved his soil’s ability to hold water. Carter made changes to his tillage system 20 years ago to stop erosion on his sloping ground, even though at the time the rate of adoption for no-till was fairly slow and he knew he had a lot to learn. It’s years like 2020 where he easily sees the benefits from his no-till system.

Early soil moisture promoted good root development. “No-till and cover crops helped that early season moisture stay in the soil,” he says. “Given the severity of the drought, I can’t complain about my yields, which were down 15% to 20% from my five-year average.”

Carter was also impacted by the historic derecho and made the observation that where he had previously planted cover crops, his corn crop had a more robust root structure. “On the farm where the corn was flattened, I’ve not had a cover crop,” he says. “Some of my other fields didn’t go down as bad.”

Three years ago, he reached out to the Soil Health Partnership for guidance on adding cover crops and plans to expand acreage when he’s comfortable with the system. “Soil tests show organic matter is improving, and I’m grateful we received timely rains and some warmth this fall. I’m happy with cover crop growth,” he says.

Matt and Nancy Bormann of Kossuth County in northern Iowa have developed a system that improves efficiencies on their farm while investing in their soil, which gives them more time to manage their family’s busy schedule. In 2020, they also benefited from a favorable stretch of weather to get their…

Read more:: How Four Iowa Farmers Remain Dedicated to 4R Plus Practices Despite Difficult We…

Matilija Creek before and after the Thomas Fire and subsequent debris flows. Fire and its aftermath can completely reshape...

SAN RAFAEL (KPIX) — It may feel like the Bay Area has had some good rain, so far in...

According to CHIRPS satellite data, as of November 20, the October to December short rains are 60-110 percent of...

Water level fluctuations at the shore

Sudan: Protests Against Water Crisis in Darfur and Nuba Mountains

Bitstarz darmowe spiny, is bitstarz legal in us