Mufi Hannemann, the former Honolulu mayor and erstwhile candidate for governor, used to say that when it came to budget decisions it was best to focus on the need-to-have rather than the nice-to-have — especially when money is tight.

Today, 10 months into a pandemic and economic paralysis, money is extremely tight in Hawaii. Facing an estimated $1.4 billion budget deficit in each of the next two years, Gov. David Ige has floated the ideas of furloughs and layoffs as well as service and program cuts to make ends meet in the near term.

Lawmakers expect to hear specific details when Ige delivers his State of the State address Monday at the Capitol. New federal stimulus money under the Biden administration may go a long way toward easing our financial woes, and recent tax collections suggest that a gradual recovery may be under way locally.

But times are still quite tough and revenue is limited. That’s why the Ige administration’s proposal to spend $30 million over the next two years to overhaul and repair the reflecting pools that surround the Hawaii State Capitol represents a foolish expenditure when there is so much fiscal uncertainty. 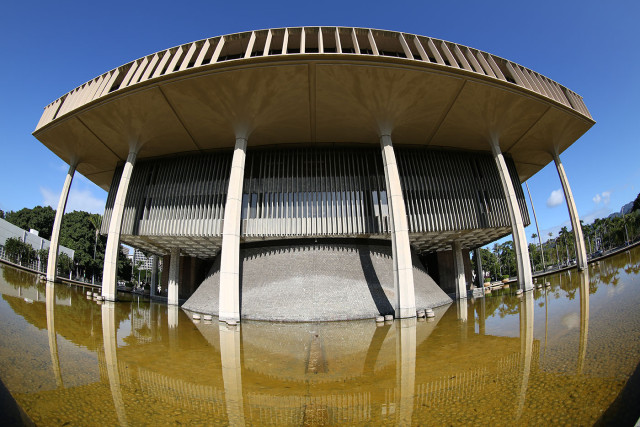 Algae in the pools, seen here in 2015, is a result of stagnant water and direct exposure to sunlight.

The work represents neither a nice-to-have nor a need-to-have project, and the governor should shelve the plan until times are much better. As Ige said himself just last month, demand for government service “is the highest it’s been, and the reality is we just don’t have the revenues to sustain government as it existed.”

There is no question that the condition of the reflecting pools is a mess. But that has been the case almost since the Capitol was opened in March 1969.

It has repeatedly sprung leaks (including into basement offices), spawned algae (which sometimes reeks) and been the unexpected home to tilapia (to eat the algae), papio and possibly even a barracuda, apparently dumped into the moats when no one was looking.

Cleanups never seem to last long. As a longtime Capitol denizen once observed, “By the time they clean one end of the pool, the other end has regrown a fresh batch of its primordial ooze. They repeat the cycle endlessly, to no avail.”

It’s not that we want part of our physical seat of government to remain in disrepair. As anyone who has taken a guided tour of the Capitol knows, the entire building is symbolic and unique.

Designed by San Francisco-based architect John Carl Warnecke, the reflecting pools represent the Pacific Ocean and surround the volcano cone-shaped Senate and House of Representatives chambers. The eight pillars fronting the now-closed Capitol entrances (due to the current security threats) are shaped like coconut palm trunks and signify the main Hawaiian Islands.

“E komo mai! Come in!” said then Gov. John A. Burns in his opening day address. “The house is yours!”

But our hale on Beretania stinks, largely…

Quotes on Water : Water is the most precious, because it is the value of life

Another Dry Year On The Colorado River Could Force States, Feds Back To Negotiat…

Colorado River water managers could be pulled back to the negotiating table as soon as next year to keep...

All around the world, people live in harsh arid climates or areas where there is very little clean and...

June 24, 2021 School’s out for summer! Really! What’s up for the vacation period? Still be careful about spreading...

Another dangerous fire season is looming in the Western U.S., and the drought-st…

Dry conditions across the West follow a hot, dry year of record-setting wildfires in 2020. Communities were left with...

It was at once one of Maine’s great cultural landmarks and one of its festering sores: a 1,400-acre plot...

Some Utahns back Governor’s order to conserve water

EDITORIAL: Road salt in Adirondacks not just a winter problem