Rain that’s out of this world


In a new study, scientists discovered that raindrops on Earth are similar to raindrops found on other planets and moons, which is surprising considering the differences between our raindrops versus ones from other planets.

Two Harvard University scientists, Kaitlyn Loftlus and Robin Wordsworth, conducted the study, using equations to examine how raindrops behave on other planets compared to our own on Earth.

What You Need To Know

Regardless of how different a planet is from Earth or what its rain is made of, the raindrops’ maximum size does not differ very much from the raindrops we see on Earth.

Scientists hope to better understand the climates and precipitation cycles outside our own with the latest findings.

In elementary school, we learned the basics of a raindrop. Rain is made of water and raindrops fall from a cloud in the sky.

Rain starts within a cloud, where you’ll find countless cloud droplets suspended in the air. Through a process called collision and coalescence, these droplets become larger and eventually grow enough to fall from the cloud as rain.

An “average” raindrop is roughly 2 millimeters wide but can be up to 5-11 millimeters in diameter.

From light drizzle to pouring rain, the size typically relates to the rainfall’s intensity.

Raindrops begin as spheres. Then, as the raindrops fall from a cloud, the bottom flattens because of the force of air pushing upward. The medium to larger raindrops take on the shape of a hamburger bun or a parachute!

About 71% of the Earth’s surface is covered by water, so it’s no wonder our raindrops are made up of water! However, water is much harder to come by, if not impossible to find, on other planets.

So, how does it rain on alien worlds?

In the new study, researchers discovered that precipitation is actually made of more unusual stuff. For example, according to the results, it rains sulfuric acid on Venus. On Jupiter, the rain is made of helium, while Mars has carbon dioxide snow.

Could you imagine a meteorologist forecasting a storm of dry ice on Mars?

Loftlus and Wordsworth’s research explains how raindrops on other planets fall similarly to our rain. The raindrops’ maximum size does not differ much, either.

According to the study, the limiting factor for how large raindrops can grow is due to the gravitational pull from the planet or moons. So, the stronger the gravity is, the smaller the raindrops will be on various worlds in our solar system. 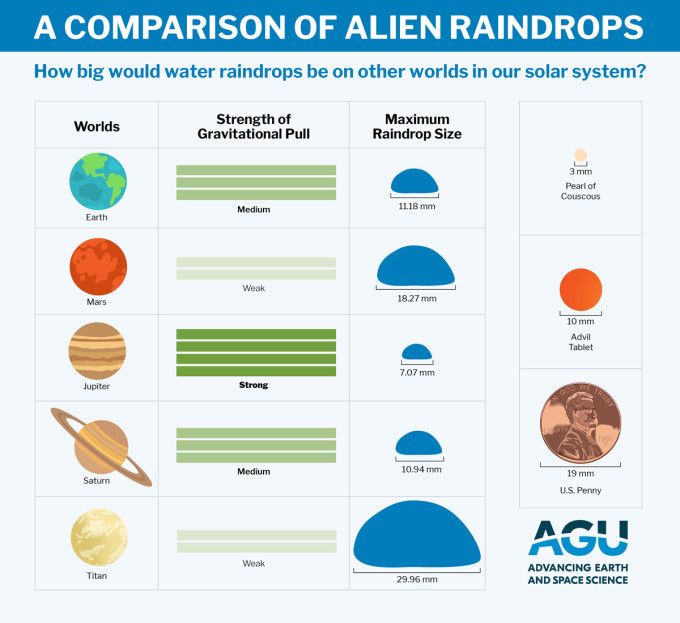 What is interesting about the graphic above is that it would appear that the raindrops have a wide range of sizes, but that’s not the case. Within the…

Read more:: Rain that’s out of this world

This Rwandan Bears The Scars Of Deforestation, Now He’s Stopping It

When it comes to appliances, there are a lot of different smart platforms out there, so it can be...

What Would A Dry Winter Mean For The Country? – Expert Reaction

Friday, 7 May 2021, 3:52 pmArticle: Science Media Centre New Zealand may be heading into a dry winter following...

Water in Bangladesh is either unhealthy or pricey

May 8th 2021BANGLADESH, WHICH sits within the world’s largest river delta, has no shortage of water. Alas, barely any...

People May Have Used Fire to Clear Forests More Than 80,000 Years Ago

Humanity’s environmental impact did not start with the bang of agriculture or industrialization but a whisper initiated long ago—one...

The Southwest is no stranger to water issues. Drought, contamination, and supply disputes have been a part of the...

This Rwandan Bears The Scars Of Deforestation, Now He’s Stopping It

Water Supply To Much Of Naas Remains Disrupted Today.