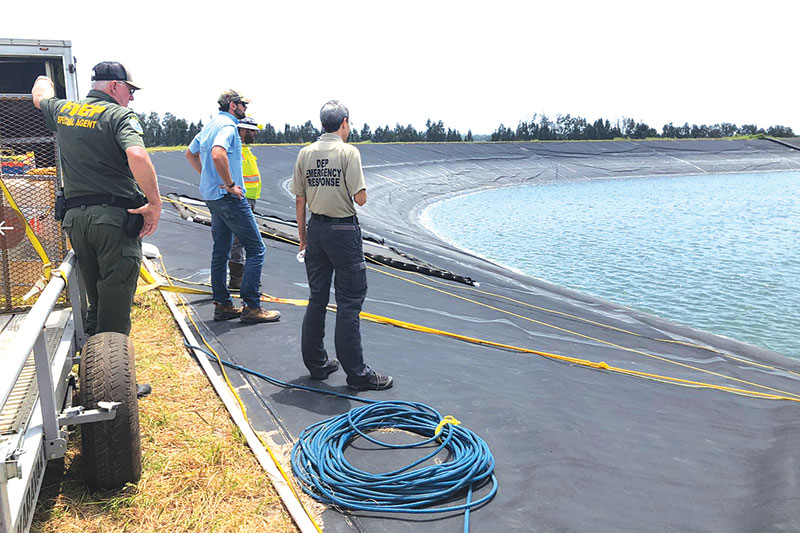 Government was to conference on a crisis.

The Manatee County Council of Governments, which includes the island cities, was to convene at 4 p.m. Tuesday, May 4, to talk about the discharge of polluted water from the retired Piney Point phosphate fertilizer site, as well as the closure of the site.

The meeting, set for after The Islander’s press time this week, was to take place in the Longboat Key Room at the Bradenton Area Convention Center, 1 Haben Blvd., Palmetto.

In late March, after years of alarms sounded by environmental groups and concerns raised by Manatee County’s government, management at Piney Point detected a leak in the largest containment pond.

The ponds hold processed water high in nitrogen, phosphorous and ammonia and sit on 70-foot-tall stacks of gypsum, a radioactive byproduct of phosphate mining.

The emergency response involved releasing about 270 million gallons of polluted wastewater into Tampa Bay to avoid the collapse of the stack system and flooding the area.

The discharges, authorized by the Florida Department of Environmental Protection, continued from March 30 to April 9.

Now the focus is on removing the waste at Piney Point, closing the site and monitoring the water quality in Tampa Bay for adverse impacts from the pollution discharges.

The DEP said April 29 that algae bloom conditions were observed in the area of the discharges.

Test results ranged from non-detect to normal levels of cyanotoxins.

The DEP also said April 29 that water samples “in the localized area of discharges in Manatee County remain within the range of non-detect to low concentrations of K. brevis,” the Florida red tide organism.

The council of governments’ agenda also included discussion on pandemic relief money and benefits, a review of the county’s boat ramps and expansion plans, an update on Longboat Key’s beach renourishment project and “hot topics” in Bradenton.

People can view the meeting on the web at mymanatee.org/mga as well as on Spectrum channel 644, Verizon channel 30 and Comcast channel 20.

Here’s How Food Processors Can Reduce Water Use — Environmental Protection

Here’s How Food Processors Can Reduce Water Use By Jane MarshDec 01, 2021 As eco-consumer rates grow, companies must...

Caras Park reconstruction ahead of schedule

MISSOULA — The mild weather is helping crews get ahead of schedule with the massive reconstruction project at Caras...

Daily water quality reports are back

Rebecca McDonald / 01 December 2021 Beachgoers will be able to check the water quality across Corio and Port...

ST. JOE, Ark. -- More than a decade of restoration efforts in a section of Northern Arkansas' Ozark National...

The Adirondack Council has released a VISION 2050 plan offering recommendations on how to manage the 6 million acre...

Had to dig deep to find water: Ravi Shastri on road to World Test Championship f…

WATER THAT IS SAFE TO DRINK

Here’s tips on how to prevent a murky, green pool