Unitree Robotics, a startup robotic company based in China has unveiled its latest bot called the Unitree Go1. The quadrupedal machine resembles a mechanical dog that you walk with every morning when you are jogging outside. It has a lone job: carrying a bottle of water while you are doing another task.

Indeed, what’s still amazing with this creation is its affordable price of $2,700 which is more consumer-friendly than Spot Robot of Boston Dynamics which sits at a staggering price of $74,500.

Unitree Go1 Robot Could Accompany You Wherever You Go 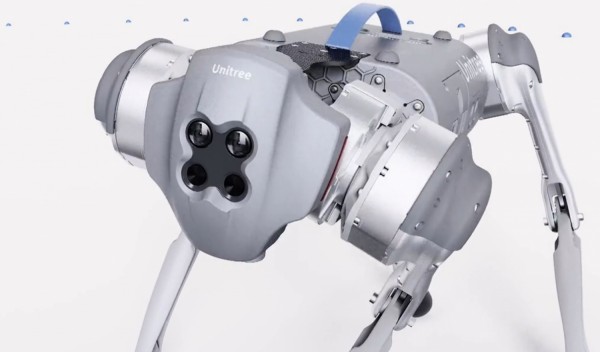 In a demo video uploaded by Unitree Robotics on YouTube earlier this week, users should not be bothered anymore in looking for a reliable companion who would run with them. The intelligent side-follow robot would literally “follow” you while you’re on your pace. It will also do the job for you of “carrying a single bottle of water.”

You could possibly give it something like a wallet if you do not have a pocket for that, but be mindful that it is impractical to do such a thing. However, if you want to join a night party with your friends, it could act like a robot butler to you.

Boston Dynamics’ Spot, for instance, has been found out to be a useful addition during industrial inspections and search operations, The Verge reported. While the Unitree Go1 has limited specs compared to the US-based robot, it would be handy for those who want to have a walking friend by their side. For its price, you could be torn between it and your next smartphone.

Read Also: This Robot Modifies its Body Based on a Particular Terrain – Shape-Shifting from Grass to Concrete is Possible!

From the official website of Unitree Robotics,  users could choose different versions for the Go1 robot, and there are three of them. The first one, Go1 Air is the cheapest among the three followed by the second Go1 which costs $3,500. The last and the third one, Go1 Edu is the most expensive with a price tag of $8,500.

Each version shares the same weight of 12 kg or 26 pounds, however, the two valuable editions come with high-grade sensors and chips although Go1 Edu remains the only model to have an unspecified programming API.

At first glance, the robot appears to be a remote-controlled toy, but it turns out that it would automatically follow a person and prevent the obstacles along its way. At the moment, the Chinese startup has not yet mentioned how long will its battery last but given Spot’s battery span of 90 minutes, we could surmise that the Go1 robot could operate for fewer minutes.

Meanwhile, the more high-tech models could run at a recorded top speed reaching 17 km/h. For the years to come, maybe the Go1 robot could carry heavier loads like a set of appliances or a sack of equipment. We could also anticipate new things that it…

We started getting those “uh oh” feelings in December. The consecutive sunny days, mild temperatures and utter lack of...

Regularly testing waterways and reservoirs is a never-ending responsibility for utility companies and municipal safety authorities, and generally —...

Can Massive Cargo Ships Use Wind to Go Green?

Schofield set up shop in a small room next to the Ben Ainslie Racing cafeteria, gathered a few of...

Harvesting Fresh Drinking Water From the Atmosphere Around the Clock

“It’s about flight itself:” Napa winery owner reaches new heights in an unconven…

“The Napa Register ran a photo of Bart in his single-seater off of 29 north of Imola,” she said.According...

Two-third of Earth Might Face Severe Drought by the End of This Century, Report …

Water and sewer rates may rise for Idaho Springs

Why Coast-based prawn trawler is in hot water