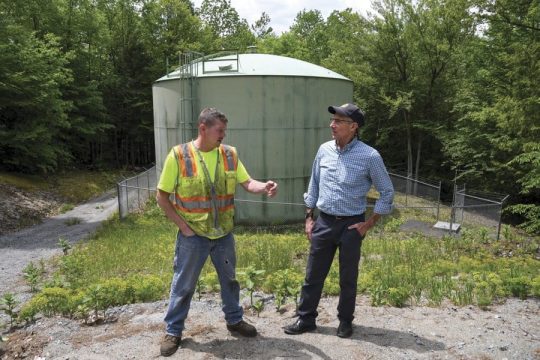 Several times a year, usually following a heavy rain, sewage that has not been fully treated overwhelms the Ticonderoga treatment plant and flows into the La Chute River, and shortly after that, into Lake Champlain. (Check out an overview of the latest “State of the Lake” report here)

There’s nothing secret about it; the town sends out email alerts whenever it happens. The Department of Environmental Conservation allows it, up to a point. If there are too many rain storms and too many overflows, the town is fined because, well, you can’t assess a fine on God.

Ticonderoga is not alone. A half century ago, communities saw no reason not to mix sewage and storm water and send it all to the treatment plant, and that worked until more development led to more effluent, which in time exceeded sewer-plant capacity.

The growth, however, has not been sufficient to pay for sewer plant expansion. Small communities in tourist areas lack enough people among whom to divide up the cost of expanded capacity. Also, sending flow through a treatment plant comes at a cost, and treating clean water makes little financial sense.

The Ticonderoga story has a happy ending, however. Within the next few weeks the town will “throw the switch” on an $8 million project primarily designed to separate storm water from sanitary sewer effluent. The storm water will be channeled into a “day stream” that is dry except in times of high water. It will receive some basic treatment for removal of trash and litter before being diverted to the river. The rainwater will not go through the treatment plant, which will be freed up to do the job in which it was intended.

Storm water, of course, has its own issues and its own set of needs. But municipalities are coming to understand that storm water and sewer flow are two different things.

Tim Rowland is a humor columnist for Herald-Mail Media in Hagerstown, Md., and a New York Times bestselling author. His books include High Peaks; A History of Hiking the Adirondacks from Noah to Neoprene and Strange and Unusual Stories of New York City. He has climbed the 46 high peaks, is an avid bicyclist, and trout tremble with fear when they see his approaching shadow. He and his wife Beth are residents of Jay, N.Y.

View all posts by →

Jim Rhodes has a goal. He wants to finish raising enough money to have five deep water wells dug...

The False Choice Between Agriculture and Clean Water – HNGnews.com

The water being supplied to Skampuk village doesn't freeze, despite the village being located at such a height. That...

The politics of water | Salon.com

In Tuba City, Arizona, where Emma Robbins grew up, the toilets flushed. Water ran from the tap inside homes,...

Manatee County officials: Process at Piney Point could take 10 to 12 days to com…

Thermador Introduces the Next Generation of Cooling Products, Bringing Complete …